One of my biggest influences in my writing is films from the Studio Gibli collection.

For those who don’t know, they are Japanese animations. My favourites among them are Laputa Castle in the Sky, Naussica of the Valley of the Wind, and Princess Mononoke. The latter has hugely inspired my fantasy world and in particular, my WIP God Slayer. Most of the connections I didn’t even realise were there until I watched the film again recently.

The idea of Gods and Demons is a direct influence of this film, my own Gods are originally modelled on the forest Gods of Mononoke but they grew and became their own thing. My Demons are equally as creepy and horrible as those in Mononoke.

Prince Ashitaka being pursued by a Demon

As I watched the film lots of small connections became apparent. Both my character and the main character in Mononoke have fallen into difficult situations involving multiple conflicts and do their very best to overcome them and do what’s right. The dark undertone of the imagery and stories are similar and even the way our characters care for their beast of burden. 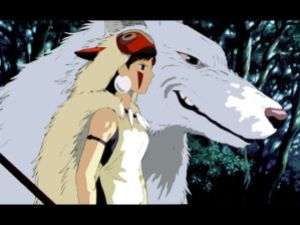 San and the wolf God Moro

The Gods in Mononoke inspired the Gods in a world I created a while ago. I absolutely love Mononoke and would recommend fantasy and film lovers to watch it.

What are your influences and inspirations?

Thank you for reading this article.

7 thoughts on “My Influences – Studio Gibli and Princess Mononoke”

Hi! My name is Ruth Ellen and I am a surface pattern designer, illustrator, author, and artist, from Durham UK. I create designs to liven up your life, with fun, bold and quirky florals. I love gardening, reading, rabbits, and playing the kalimba (badly).